The archaeological site Dhambalin is located in the north-western part of Togdheer in Somaliland. It is a sandstone rock shelter were prehistoric inhabitants have depicted various animals on the walls, such as cattle, goats, sheep and giraffes. (Notably, giraffes do not live in Somaliland today.)

The pictures are believed to have been created 5,000 – 3,000 years ago, and the depiction of sheep in Dhambalin is one of the oldest found in the entire Horn of Africa. 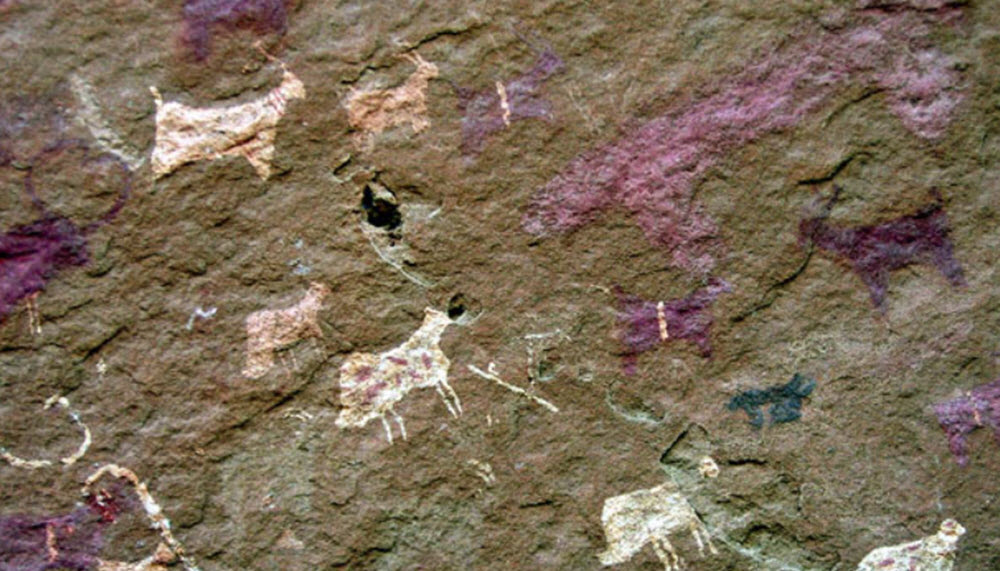 The archaeological site Dhambalin is located in Togdheer in Somaliland, approximately 65 km from coast. The closest settlement is the rural village of Beenyo Dhaadheer. The closest city is the port city Berbera.

The paintings, which are multi-coloured and multi-layered, cover an area of roughly 12 by 4 meters.

The style is the Neolithic or proto-historic Ethiopian-Arabian one known from several other archaeological sites within Somaliland, including several cases of prehistoric rock art discovered in Togdheer.

Examples of animals that are depicted at Dhambalin:

Some of the animals are depicted alongside humans.

Some humans are depicted as parts of hunting scenes on the rock wall, carrying bows and arrows. In one detailed picture of a hunter, we can see that their hair is worn down together with a headgear and that they are accompanied by two dogs. There is also a picture of a human sitting on an animal (possibly a horse) with raised hands.

The animals are depicted in a much more lifelike manner compared to the humans, and most of them are shown in profile.

The rock art was unknown to the world of archaeology until 2007, when local residents of Beenyo Dhaadheer reported the rock art to the archaeologist Sada Mire, director of the Department of Archaeology at the Ministry of Tourism and Culture of Somaliland.

The United Nation funded a study of the site, after which Dhambalin was added to the UNESCO World Heritage list.

The sandstone shelter rock is fragile and effected by wind erosion and porosity. Portions of the rock fragments have already broken off.